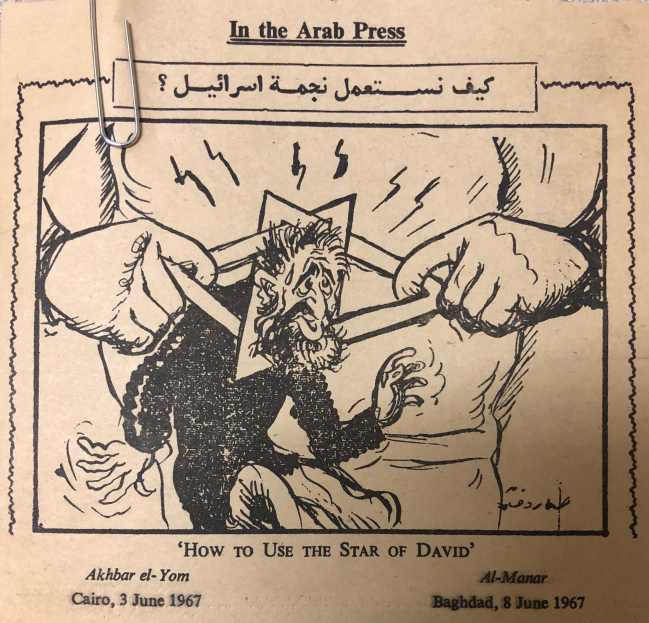 Milton Senn was a lawyer, government consultant and ADL’s Los Angeles Regional Director from 1947 to 1974. Throughout his tenure at ADL, Senn worked tirelessly to build a better community and collected various artifacts to document his time as Regional Director. After his passing in 1974, his son, Mark Senn, collected his father’s belongings and brought them to Denver. Over the summer, ADL Mountain States Region interns Yehna Bendul and Grace Glaser sorted and documented these artifacts and prepared several items for archiving at the national ADL library in New York.

After cataloguing numerous political cartoons, essays, letters, and newspaper clippings, contents emerged ranging from essays covering the Civil Rights Movement to growing anti-Semitism domestically and internationally to over 400 political cartoons, quotes that Senn found inspiring and even an admission ticket to the U.S. Senate Chamber for 1970. Through Senn’s meticulous collection of newspaper articles, our interns tracked the changes in the U.S. political climate from 1969 to 1974. Senn also collected over 400 political cartoons, among which was a book Senn himself designed exclusively containing political cartoons about Golda Meir, Israel’s Prime Minister from 1969 to 1974. Every request for a cartoon was documented by letters to newspapers from across the country and ended with a thank you card from Golda Meir herself.

While sorting through all of these documents often seemed like assembling a puzzle, our interns reported that they felt privileged to piece together a picture which was not only reflective of Senn’s extraordinary life and career, but also a visual representation of political turmoil and that is still reflective today. The compilation of the artifacts demonstrates the importance of the work that ADL does, the organization’s constant commitment to its mission statement and the amazing impact that passionate employees, dedicated to eradicating hate, can have.