Incidents more than double across Colorado, New Mexico and Wyoming

White supremacist propaganda distribution surged across the United States in 2020, with a total 5,125 cases of racist, antisemitic and other hateful messages reported by ADL (Anti-Defamation League). Last year marked the highest level of incidents reported since ADL began tracking such data – an average of about 14 incidents per day, and nearly double the 2,724 cases reported in 2019.

One of the most active groups across the three-state region was Patriot Front, an antisemitic and racist group whose members maintain that their ancestors conquered America and bequeathed it to them alone. They define themselves as American fascists or American nationalists who are focused on preserving America’s identity as a European-American identity.

In 2020, hate propaganda appeared in every state except Hawaii, with the highest levels of activity in Texas (574), Washington (345), California (333), New Jersey (323), New York (308), Massachusetts (276), Virginia (249), and Pennsylvania (238). ADL’s H.E.A.T. Map provides a visual representation of the propaganda distribution efforts by geographic location and can be used to highlight other specific trends. 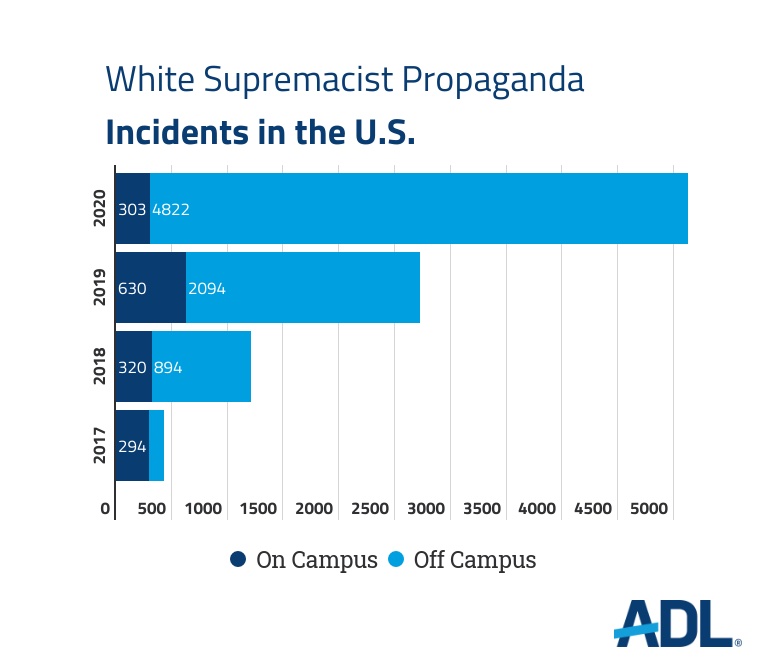 Some key data points from the report:

Propaganda gives white supremacists the ability to maximize media and online attention while limiting their risk of exposure or arrest, according to ADL’s Center on Extremism. The literature helps to bolster recruitment efforts and spreads fear by targeting specific groups, including the Jewish, Black, Muslim and LGBTQ+ communities, as well as non-white immigrants.

Posted in In the News.